What is Inlet Effect? 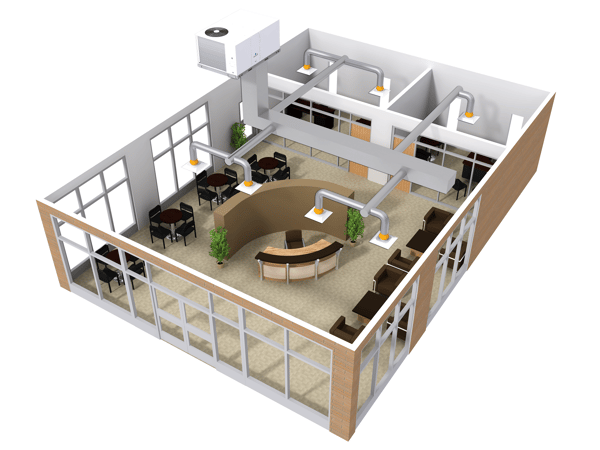 ASHRAE Standard 70 guidelines are in place so that ideal conditions are present during GRD testing
and to ensure the testing is repeatable. It is important to note that the performance
published in the Price catalog is based on these ideal conditions outlined in ASHRAE 70 and that
any field modifications can affect the performance of the outlet. There are five common field conditions and their influence on the air pattern of a given diffuser:
Let's compare air patterns for ASHRAE Standard 70 compliant tests against those with the
five field inlet conditions listed above.
Three different types of ceiling diffusers will be used to depict the results:

To illustrate the air pattern, constant velocity plots (isovels) that display an envelope of air at an equal velocity will be used. Note that the diffuser shown in each image is a generic image intended to represent the diffuser described in the text.

All diagrams will show the isolated velocity at 100 fpm for easy comparison. Each test was run at the same airflow, and the dampers were installed with three (3) equivalent duct diameters and adjusted to obtain a pressure drop of 0.25 inches w.g.

In Figures 2 to 4, lines of equal velocity (isovels) are shown for the three types of diffusers when installed using the ideal inlet conditions described in ASHRAE 70 installation guidelines, as shown in Figure 1.

Figure 2 depicts a typical pattern for a perforated diffuser, such as the Price PDS. This diffuser produces four distinct air jets, originating from the corners of the diffuser face. 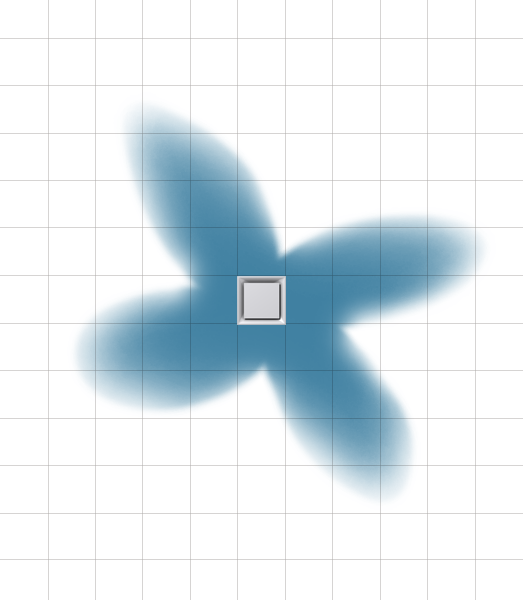 Figure 3 displays the pattern delivered from a directional diffuser, like the Price SMD diffuser. This diffuser also displays four distinct air jets however, the airstreams root from the sides of the diffuser face instead of the corners, as was seen with the perforated diffuser.

Figure 4 shows the air pattern from a radial patterned diffuser like the Price square plaque diffuser, model SPD. Unlike the first two diffusers, this product has a radial pattern encompassing a full 360 degrees surrounding the diffuser. As a result, the throw distances will be slightly shorter at the same airflows when compared to a four-way diffuser like the PDS or SMD.

The first field installed inlet condition that will be discussed is a 90 degree hard duct elbow, the installation of which is shown in Figure 5. The diagrams below display two different isovels superimposed on top of each other. 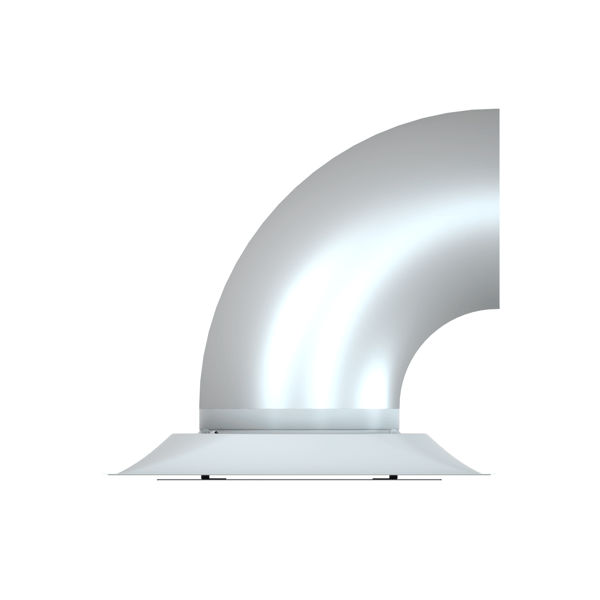 The blue isovel represents ideal inlet conditions and will be included for comparison against all field installations. The purple isovel illustrates how the 90 degree hard elbow on the diffuser inlet affects the air pattern for the three different diffusers. The air pattern of the perforated diffuser is not significantly affected, as it still displays a distinct four-way throw shown in Figure 6. However it is clear that the 90 degree elbow has shifted the pattern slightly clockwise. 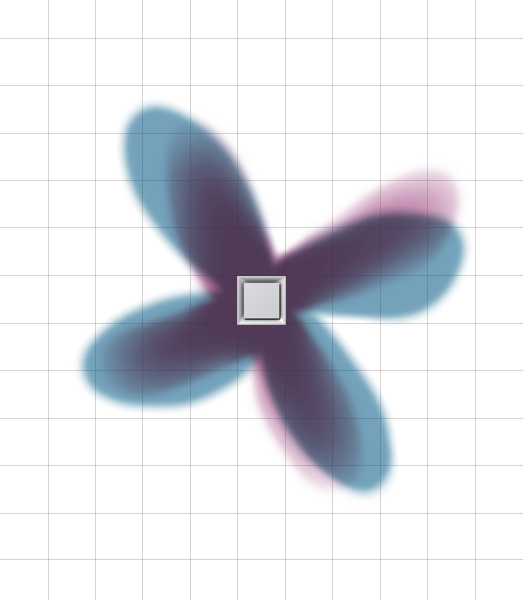 Figure 7, depicting the directional diffuser, indicates that the pattern placement remains unchanged with the 90 degree elbow. However, there is a drastic reduction in the throw on three sides and an increase on one. Since the same amount of air is being delivered through the diffuser, it is also possible that the reduction in throw in three directions has resulted in an increased drop, possibly causing discomfort to the occupants.

The plaque diffuser shows more resilience, as the pattern is only slightly changed as seen in Figure 8. This slight modification would likely not produce a noticeable difference to the occupants. 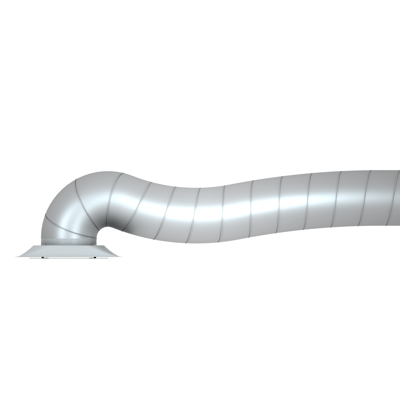 The yellow isovel displays the adjusted air pattern when connected to a 90 degree flex duct. This added affect is primarily due to an increased surface roughness due to the spiral of the flex duct as well as an uneven airflow caused by the non-fixed radius.
The perforated diffuser, as shown in Figure 10, is now distributing a three-way throw pattern instead of the intended four-way pattern. This could cause stagnant zones adjacent to the side of the diffuser that is no longer discharging fresh supply air. 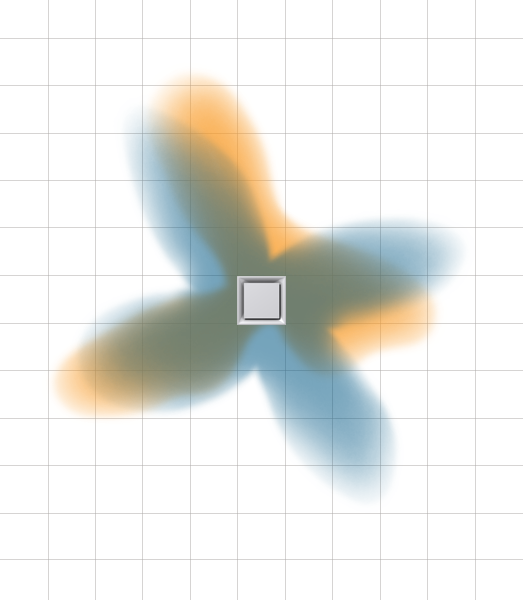 Similar to the 90 degree hard duct, the square plaque diffuser’s pattern has not been affected significantly, as shown in figure 12, although there is a noticeable shift in the distribution area. 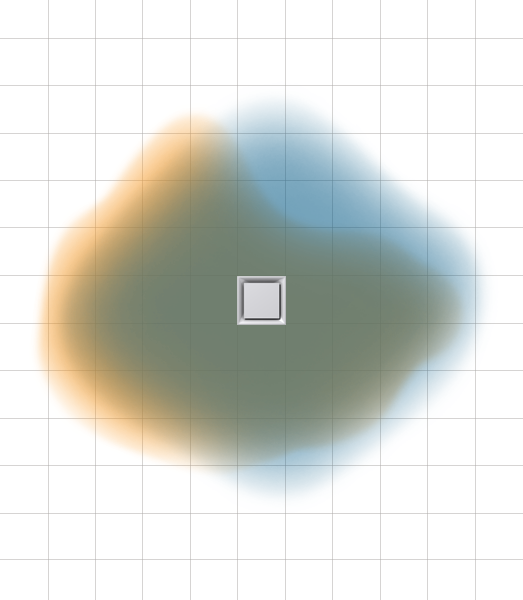 Adding a radial opposed blade damper to a diffuser neck, pictured in Figure 13, to the neck of the
diffuser will not only increase pressure drop, but affect the air pattern as well. 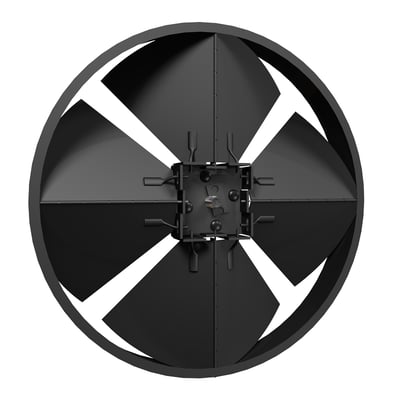 The light blue isovel represents the changes to the air pattern after installing a radial opposed blade
damper. The damper has significantly changed the pattern of the perforated diffuser as seen in Figure
14. 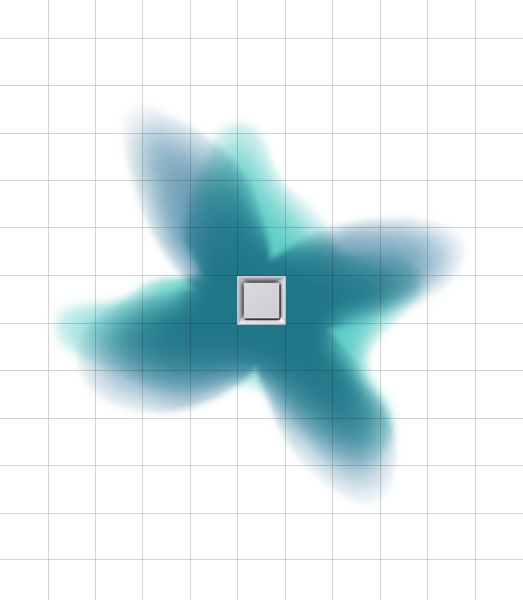 The pattern has morphed into an almost radial pattern, with no distinct air jets. Some directional
diffusers are positioned such that air jets from one diffuser will intersect with air jets from a different
diffuser. This will cause the air to deflect downwards, towards the occupied zone, helping to properly
mix the space. In this case, the change in air pattern could mean that this junction would not occur
creating discomfort to the occupants as the conditioned air would remain above the occupied zone.
The directional diffuser in Figure 15 retained its four-way pattern, however, with a shortened throw and a probable increase in drop. 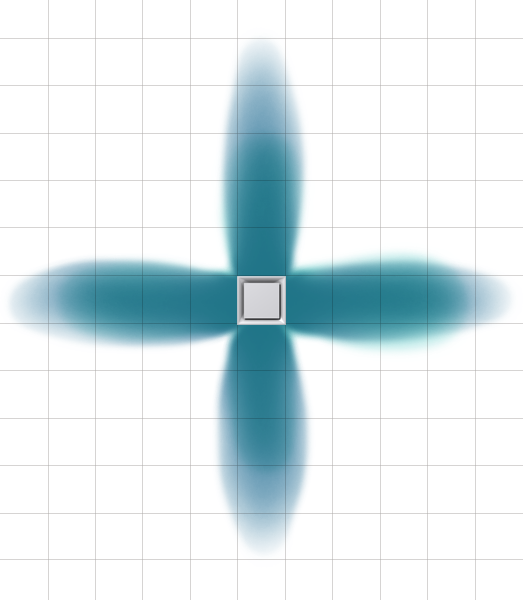 Once again, the square plaque diffuser remains relatively unchanged, with the pattern only slightly affected by the addition of the damper (Figure 16). The radial opposed blade damper, due to its design, retains a fairly even air distribution across the entire area of the inlet. 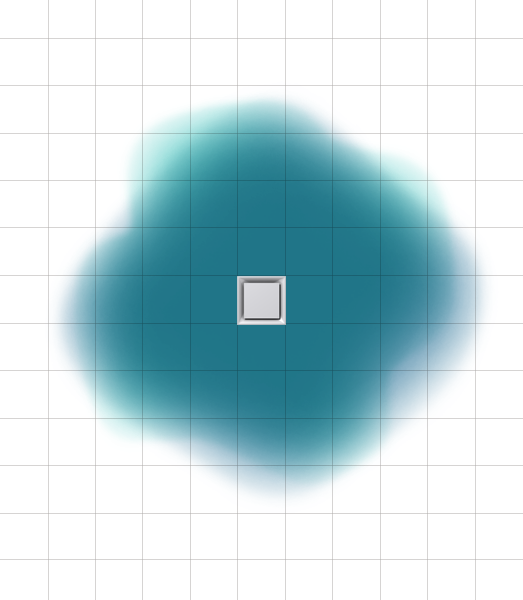 The green isovels in the following three figures represent the air patterns produced by the diffusers
with a butterfly damper (Figure 17) installed.

Figure 18 indicates adding a butterfly damper does not affect the pattern of the perforated diffuser, but will nonetheless shift the pattern in a counter clockwise direction. 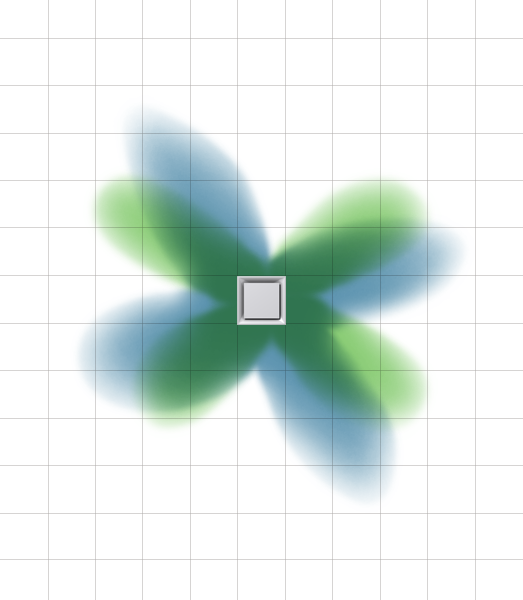 The pattern of the directional diffuser is also left unmarred, but as seen in Figure 19, the throw is reduced in all four directions. As in the previous cases, a reduction in throw will, in all likelihood cause an increase in drop which can decrease occupant comfort levels. 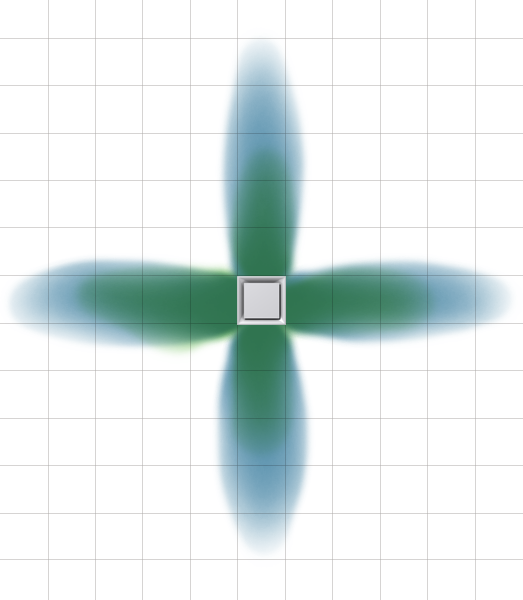 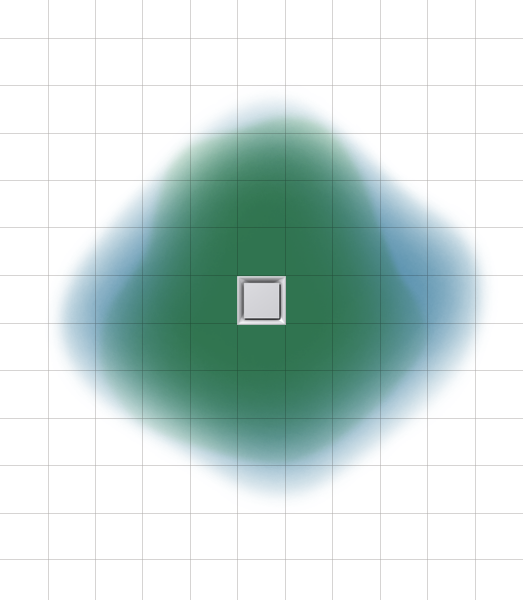 Radial dampers, as shown in Figure 21, operate by limiting the flow through the duct with
bowtie shaped plates. A major disadvantage to using this style of damper is a drastic increase in
pressure drop due to the uneven reduction in cross section of the inlet area. 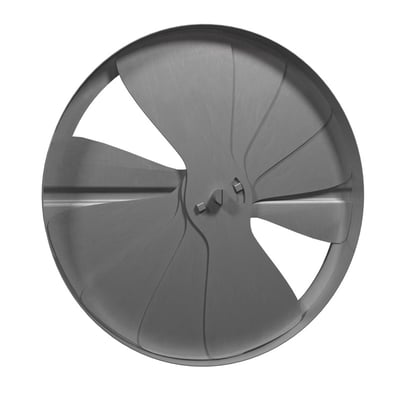 The radial damper isovels are displayed in a purple color. Of the 5 inlet conditions presented,
Figure 22 depicts the most profound modification seen to a diffuser throw pattern. The radial damper
has altered the pattern from four distinct jets to a, six-way star like pattern.

The diffuser retains its four-way pattern, but the addition of the radial damper shortens the throw and consequently increases the drop. Compared to the four previously discussed inlet conditions, the radial damper causes the most dramatic effect on air pattern of the square plaque diffuser, although still much less than with the other diffusers. Similar to earlier examples, the directional diffuser shown in Figure 23 sees a less drastic change in air pattern. 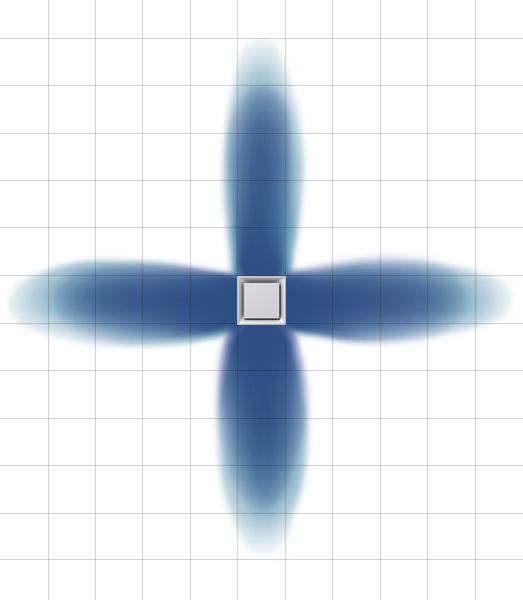 The normally radial pattern of the plaque diffuser (Figure 24) is transformed into a more oblong shape, increasing throw in some directions, and reducing throw in others. 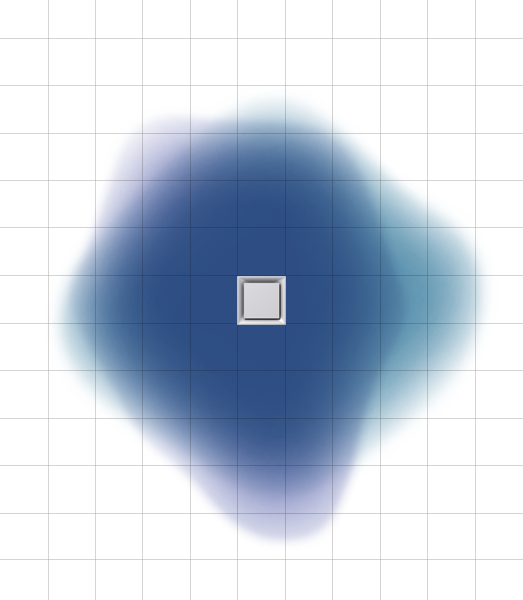 This study has revealed the different degrees to which ceiling diffusers are affected by an assortment of common field inlet conditions.
Depending on the type of diffuser selected, different inlet conditions can have a varying impact on the performance of a diffuser ranging from minor to significantly detrimental. This demonstrates that proper diffuser selection and consideration of field inlet conditions is important. Certain diffusers have more yielding design qualifications, and should be used in instances where less than ideal inlet conditions exist.
Primarily, the square plaque diffuser experienced minor changes to its overall pattern and throw when tested with the five inlet conditions. Conversely, it was shown that the perforated diffuser was the most affected by varying inlet conditions.
By choosing the square plaque diffuser in areas where these inlet conditions are expected and
unavoidable, the risk of potential discomfort for the occupants can be reduced.
For more information on this and other topics, please see the Price Engineer’s HVAC Handbook or email grd@priceindustries.com with specific GRD questions. 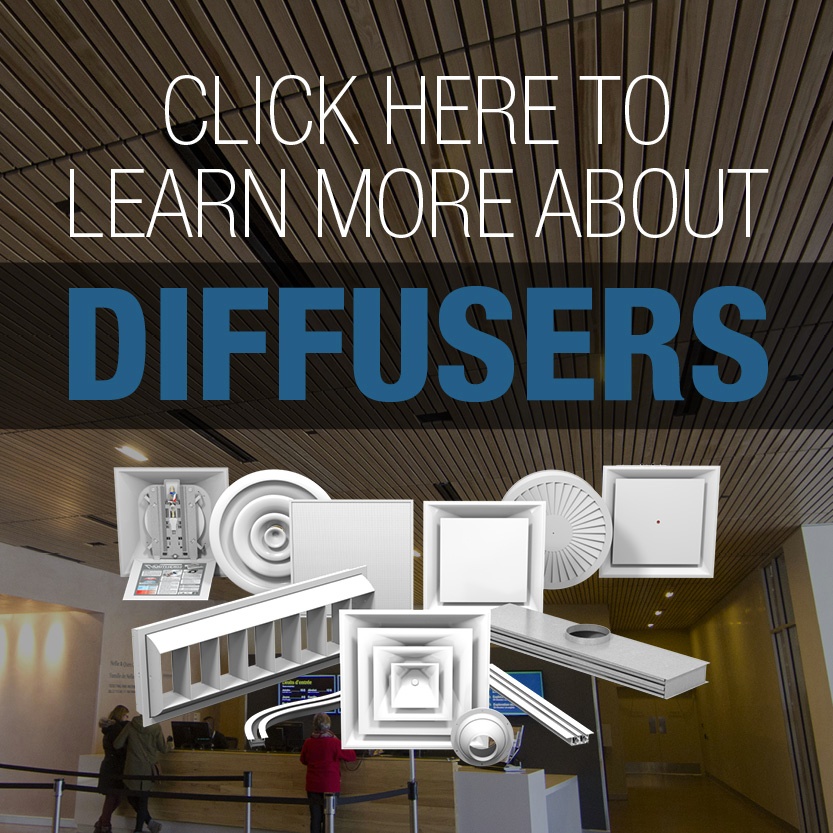