The future of commercial office design faces a number of challenges, including a shift away from densely occupied open office concepts and a heightened concern for occupant health. North America continues to adopt newer energy codes that task design firms to further reduce energy consumption. In addition, indoor air quality (IAQ) has arguably become a principal element of building design. 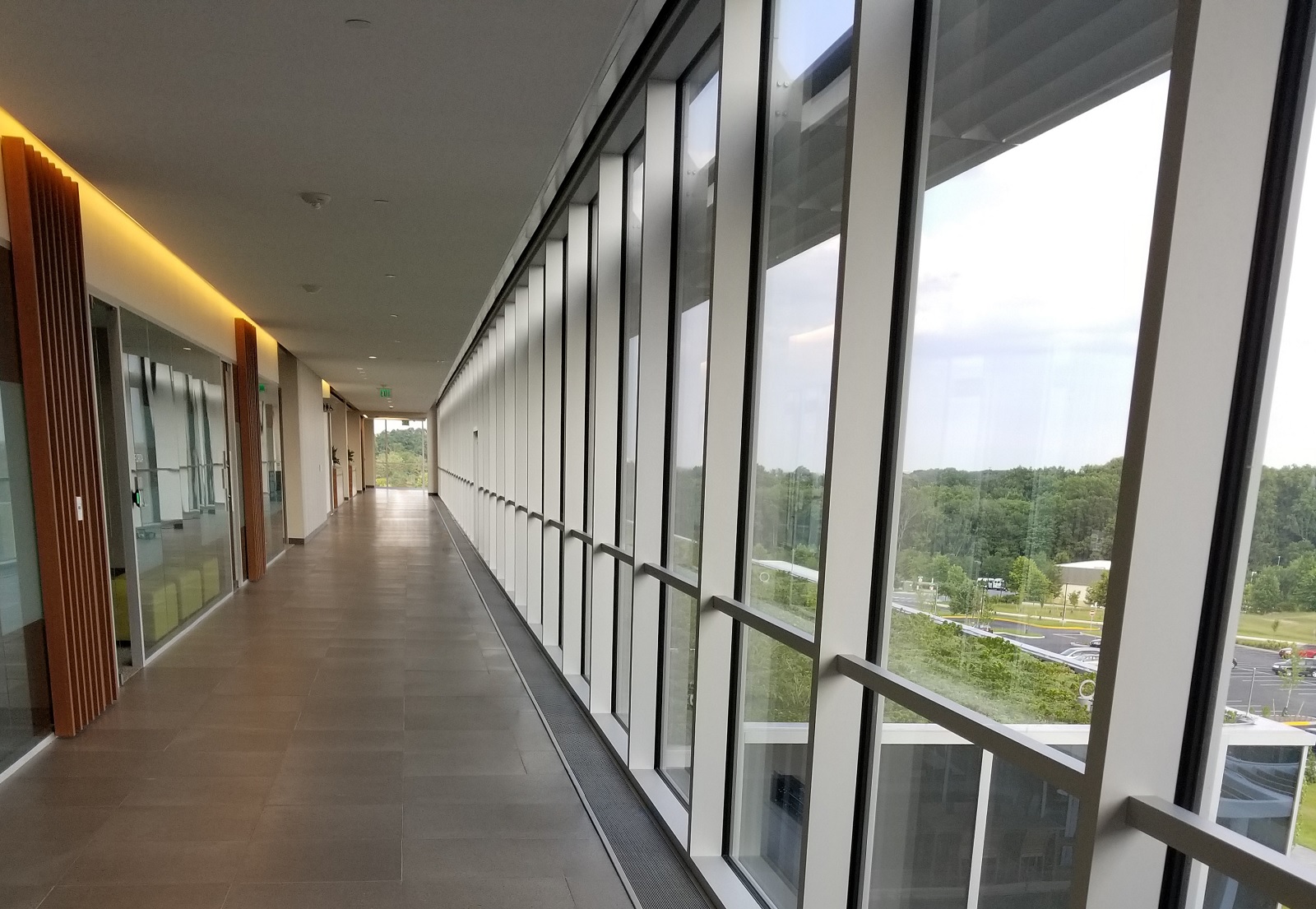 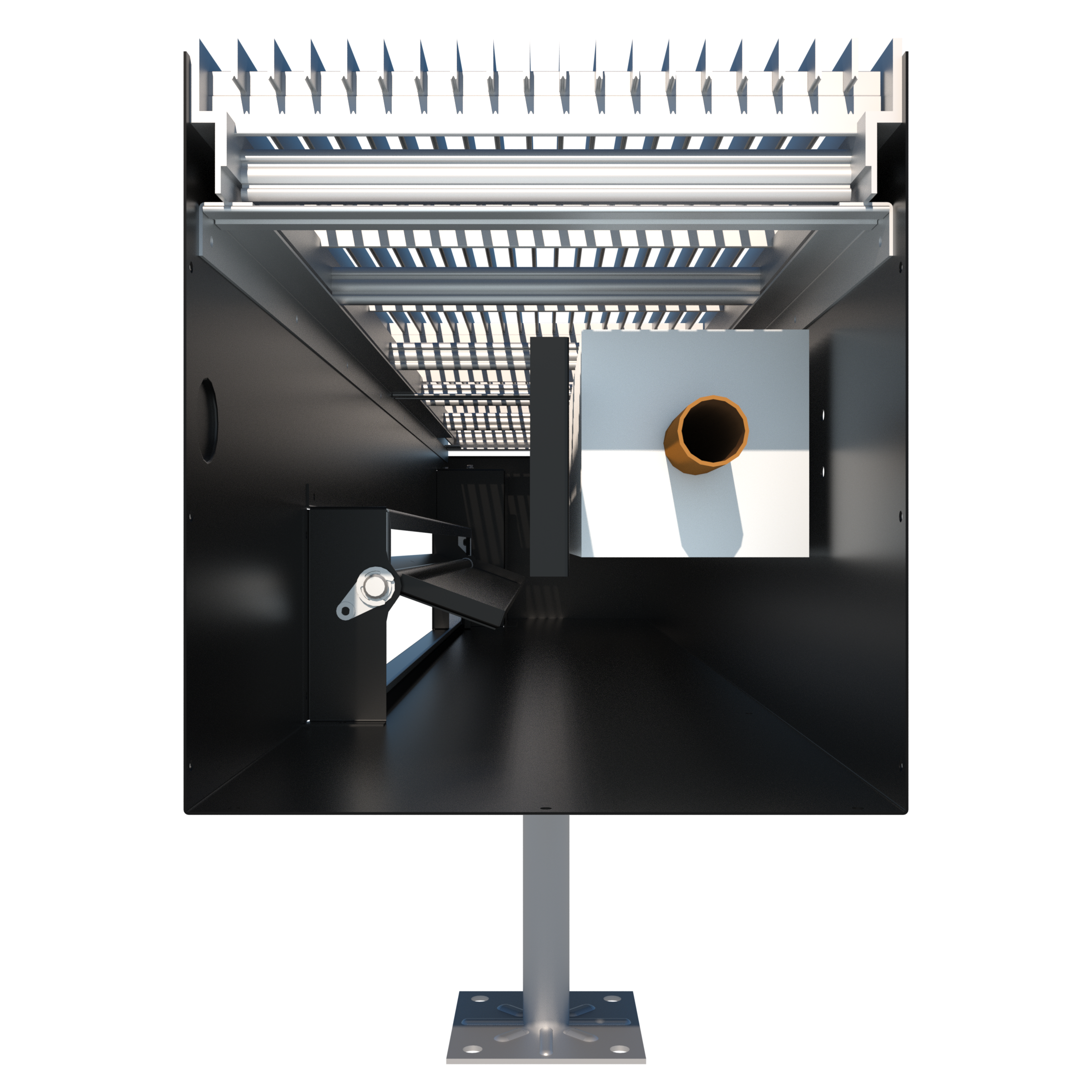 As its name suggests, the LNT operates off natural convection to provide heat to the space. It pulls the cooler room air into the trench, and that air passes through the heating element within the trough itself. 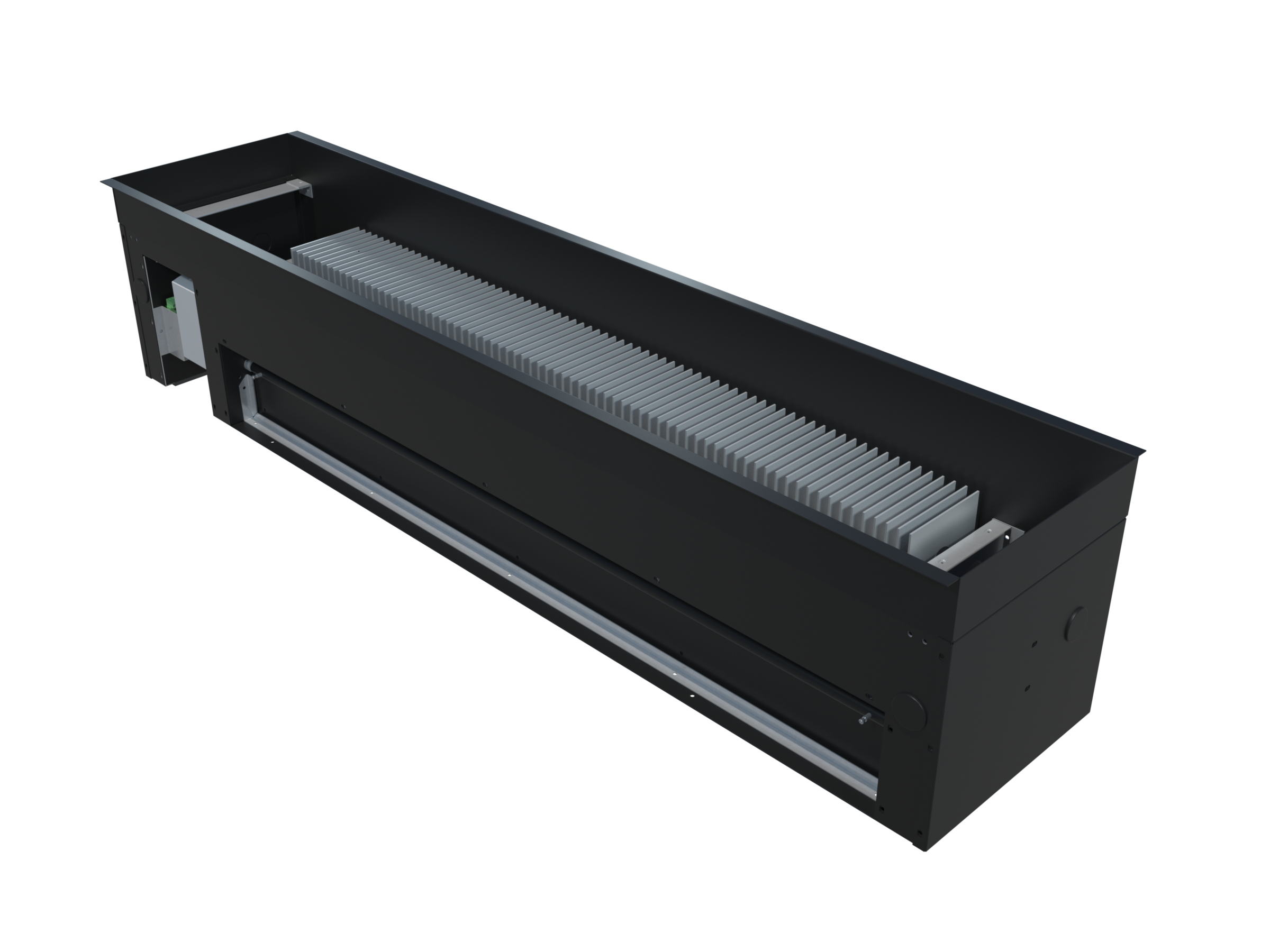 The unit is available with coil types to suit any climate in North America. Customers in the cooler climates like Canada and the northern US can take advantage of the new high-capacity coil, which is designed to meet higher heating loads while maintaining a low static pressure drop. This removes the need to include several fin tube elements stacked within the underfloor perimeter, saving floor height, piping connections and install time. Heating can be controlled efficiently with a silicon controlled rectifier (SCR), providing discharge temperature monitoring and control.

The LNT provides cooling through a new inset damper design that sits within the footprint of the plenum even when the damper is fully open. The updated design minimizes the need to coordinate the location of the air dampers that extend out from the plenum and floor pedestal locations. The inset design also removes the need to coordinate with other building elements on-site and expedites the installation process. Further, damper size is no longer restricted to fit within the pedestals and therefore provides more airflow through a single air valve (actuator). All electrical components, such as the circuit board and actuator, are room-side accessible for easy replacement. 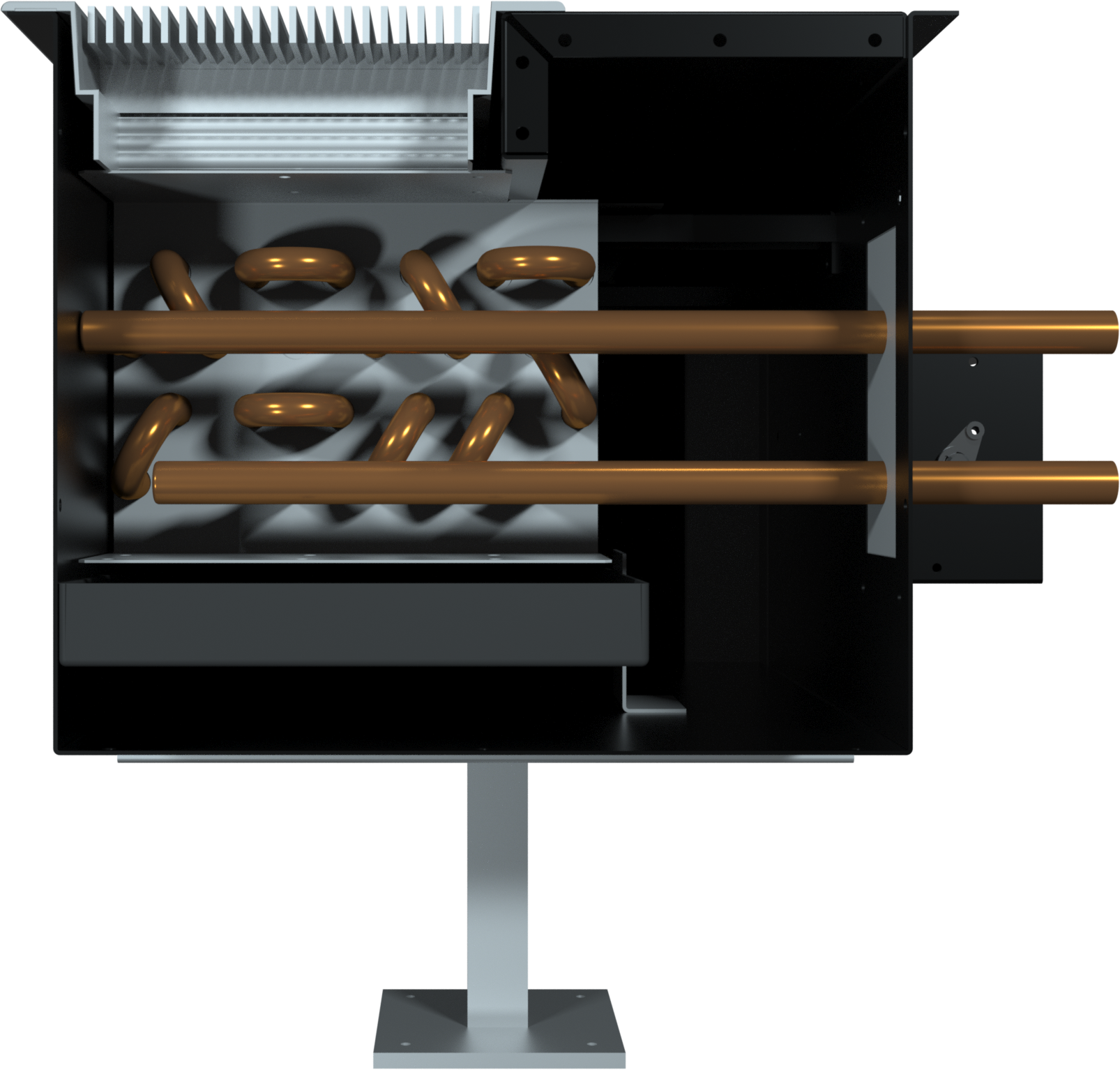 Typical supply air temperatures in a pressurized floor plenum ranges from 60°F to 65°F (15°C to 18°C). The LFGB is available with two to four rows of cooling coil and provides cooling down to 55°F (13°C) supply, reducing the air volume required to cool the heat gain at the perimeter and compensating for any thermal decay that may occur. This provides designers and building owners with individual control and flexibility for each zone.

The Linear Fan Terminal (LFT) is the latest addition to the perimeter offering. The LFT provides superior control independent of the underfloor plenum conditions and recirculates room air through the coil during cooling and heating using an efficient ECM tangential fan.

The LFT creates forced convection through the electric or hydronic coil within the trough. As the market continues to design with milder water temperatures from equipment, such as condensing boilers with temperatures at 100°F to 140°F (38°C to 60°C), this device still provides a high degree of heating (1–2 MBH/ft.). The unit can be designed to provide cooling for sensible only or condensing conditions.

The LFT can also be used for non-raised floor applications, as within a concrete trench. The low-profile design sits at 4–6 in. in total height, making it a great option for renovations. 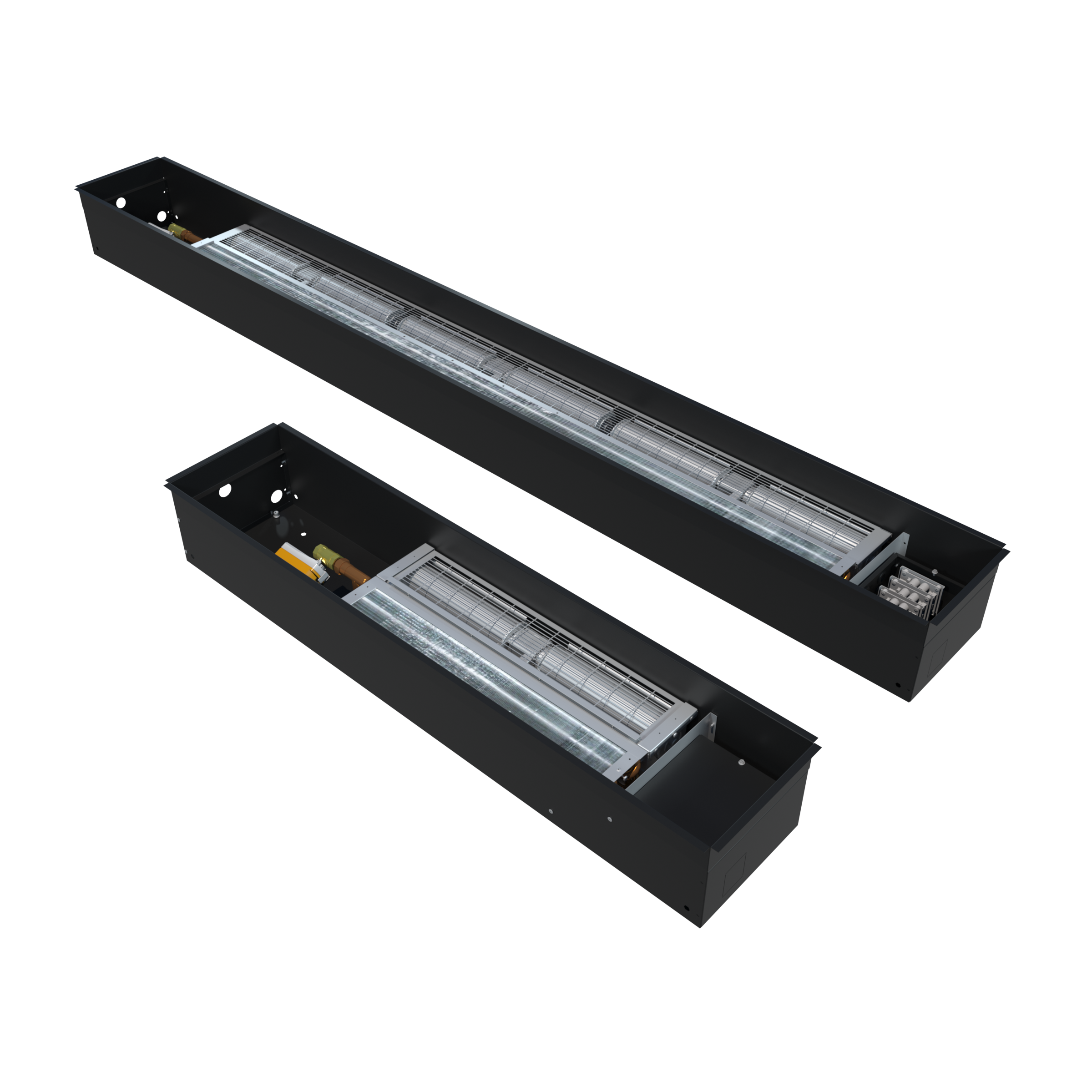 No matter the climate or design challenge, there is a perimeter solution to meet any modern design requirement. These approaches will reduce maintenance and increase energy efficiency while enhancing other UFAD benefits, such as improved IAQ and space flexibility. Please reach out to Underfloor@priceindustries.com for more information. 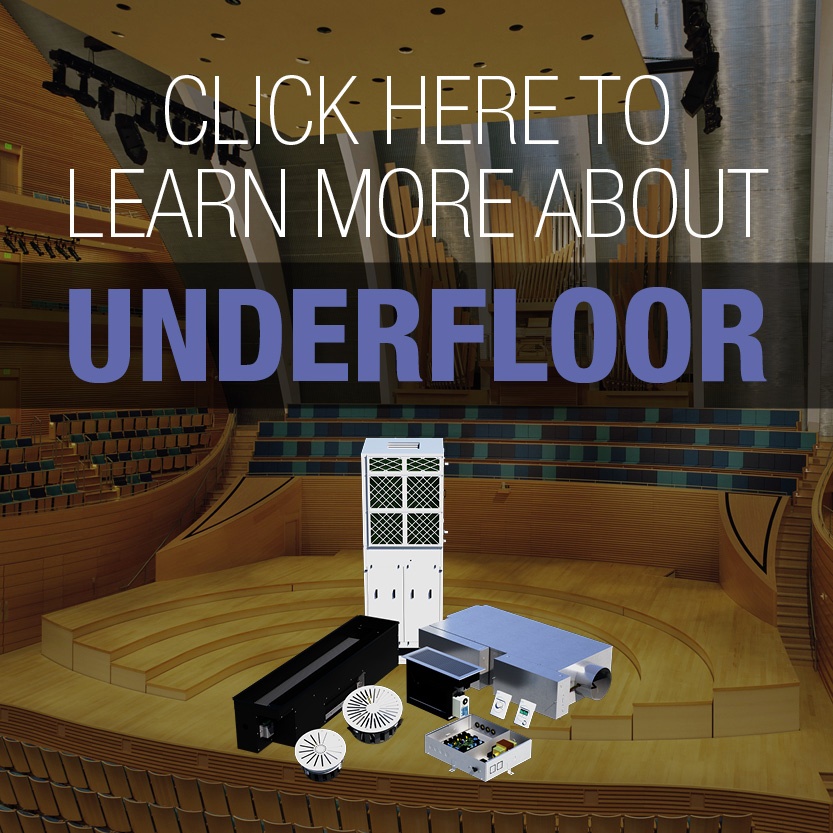