Air filters are an essential part of any HVAC system to remove particulate contaminants in the supply air that would otherwise be harmful to the building occupants, or build up in the ductwork or equipment. They are also an essential part of air moving devices such as terminal units, fan coils and air handlers as they remove dirt that would otherwise cause coil blockages and fan wheel imbalances.

An example of the interior of ductwork that has particulate build-up on the liner surface is shown in Figure 1. 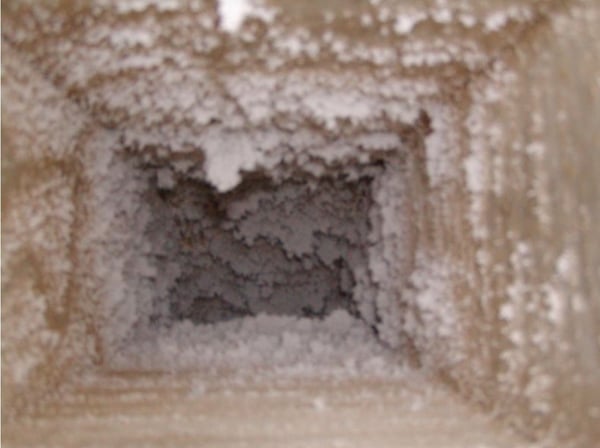 Air moving devices such as fan powered terminals and return grilles typically use low to mid efficiency filters. High efficiency filters such as HEPA and ULPA filters are typically installed near the air outlet to avoid possible contamination from ductwork leakage and are not covered in this tech tip. For more information on HEPA and ULPA filters, see Chapter 20—Introduction to Health Care HVAC and Chapter 21—Applications of Health Care HVAC in the Price Engineer’s HVAC Handbook. An example of a blower that has build-up of air particulate contaminates is shown in Figure 2. 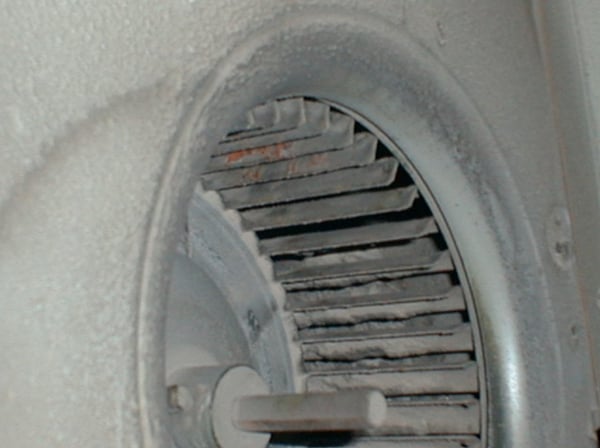 Many different types of filters are available to meet system requirements. The major concerns when selecting a filter are the amount of filtration required and the amount of pressure drop associated with the filter selection. The level of air resistance (pressure drop) varies depending on the size, surface area and physical attributes of the filtering medium.

Most people believe that all air filters function as physical barriers that operate on a go/no go basis where dirt particles that are larger than the openings in the filter are trapped and particles that are smaller than the openings pass right through. A dry paper air filter does function in this manner, which is why paper filters are so restrictive to airflow. The openings in this type of filter have to be very small to filter efficiently, and thus, these filters have a high pressure drop.

To increase the filtration aspect and lower the pressure drop, a principle known as inertial impaction is used. Inertial impaction occurs when the inertia or momentum of the particle causes it to deviate from the flow path. In other words, the heavy particles do not successfully follow the air stream around the filter media fibers, but instead run straight into the fibers and are captured.

Another important principle for air filtration is diffusion. The laws of physics that govern the motion of very small dirt particles show that small particles are highly affected by the forces in the air stream. Forces such as change in local air velocity, change in local air pressure, turbulence due to the movement of other dirt particles, and interaction of the dirt particle with the air molecules cause the movement to become random and chaotic (Brownian motion). As a result, these particles do not follow the air stream and their erratic motion may cause them to collide with the filter media fibers. The trick in diffusion is to ensure that once a particle collides with a filter media fiber it stays attached to the fiber. Diffusion enables an air filter to capture dirt particles that are much smaller than the openings in the media. Often the media fibers are covered with a viscous and sticky substance that increases the odds that the dirt particle will remain attached to the fiber media.

There are two types of filters that are commonly used in air moving devices:

Panel filters are made using coarse, highly porous fibers coated with a viscous, sticky substance to increase particle impingement and detainment on the fibers. They rely on air straining and inertial impingement to capture contaminant particles. Panel filters are typically low cost and have low pressure drops, but they also have low cleaning efficiencies.

They are generally used on terminal units and low pressure fan coils. Extended surface filters use fiber mats of varying thickness, density, and fiber size in a frame to form pockets or pleats. This creates a higher surface-to-face-area ratio which reduces pressure drops and face velocities. These lower velocities allow for interception type particle capture, as well as air straining and inertial impingement.

Pleated filters generally have higher efficiencies and lower pressure drops than panel filters, which is why they are used in larger capacity units such as blower coils and high performance fan coils.

Different applications require different levels of air cleaning effectiveness. When selecting a filter, the designer must consider several factors such as the type of contaminants present, the size and concentration of contaminants, and the level of air cleanliness required. They must also consider the system constraints such as available space, allowable airflow resistance, and system cost. Most filters are tested and rated according to ASHRAE Standard 52.2. This standard assigns filters a minimum efficiency reporting value (MERV) rating based on their particle removal efficiency at various particle sizes and airflow rates. The standard also reports a filter’s resistance to airflow. Table 1 lists some of the most commonly used MERV ratings and their typical applications. For the complete table please refer to the Price Engineer’s HVAC Handbook, Chapter 20—Introduction to Health Care HVAC.

The level of filtration varies and should be selected appropriately for the intended use of the equipment, as shown in Table 1 below.

If the terminal unit has a reheat or cooling coil, the use of a filter is strongly recommended. Access doors should be specified to allow for inspection and cleaning of the coil fin surface, as there is a potential for lint build-up on the coil fin surface over time, particularly since the building maintenance group may fail to replace the filter. 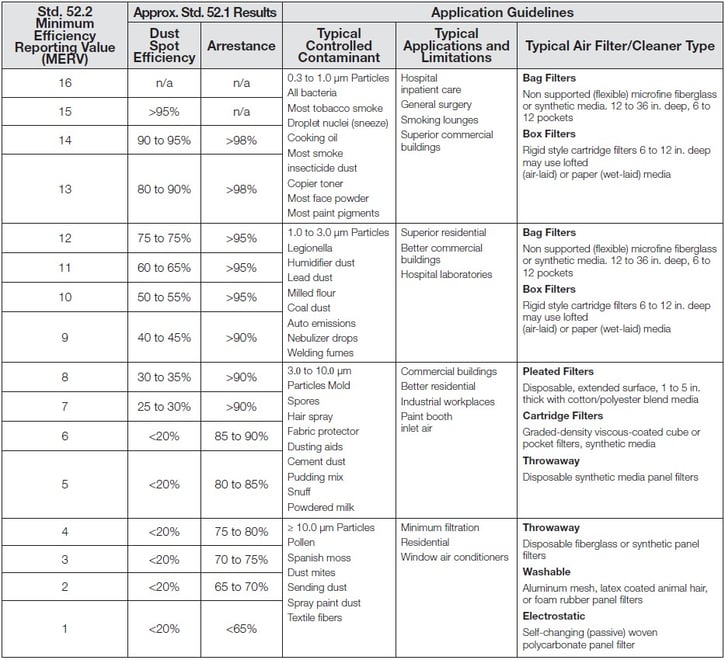 Note: MERV fans for non-HEPA/ULPA filters also includes test airflow rate, but it is not shown here because it is of no significance for the purpose of this table. 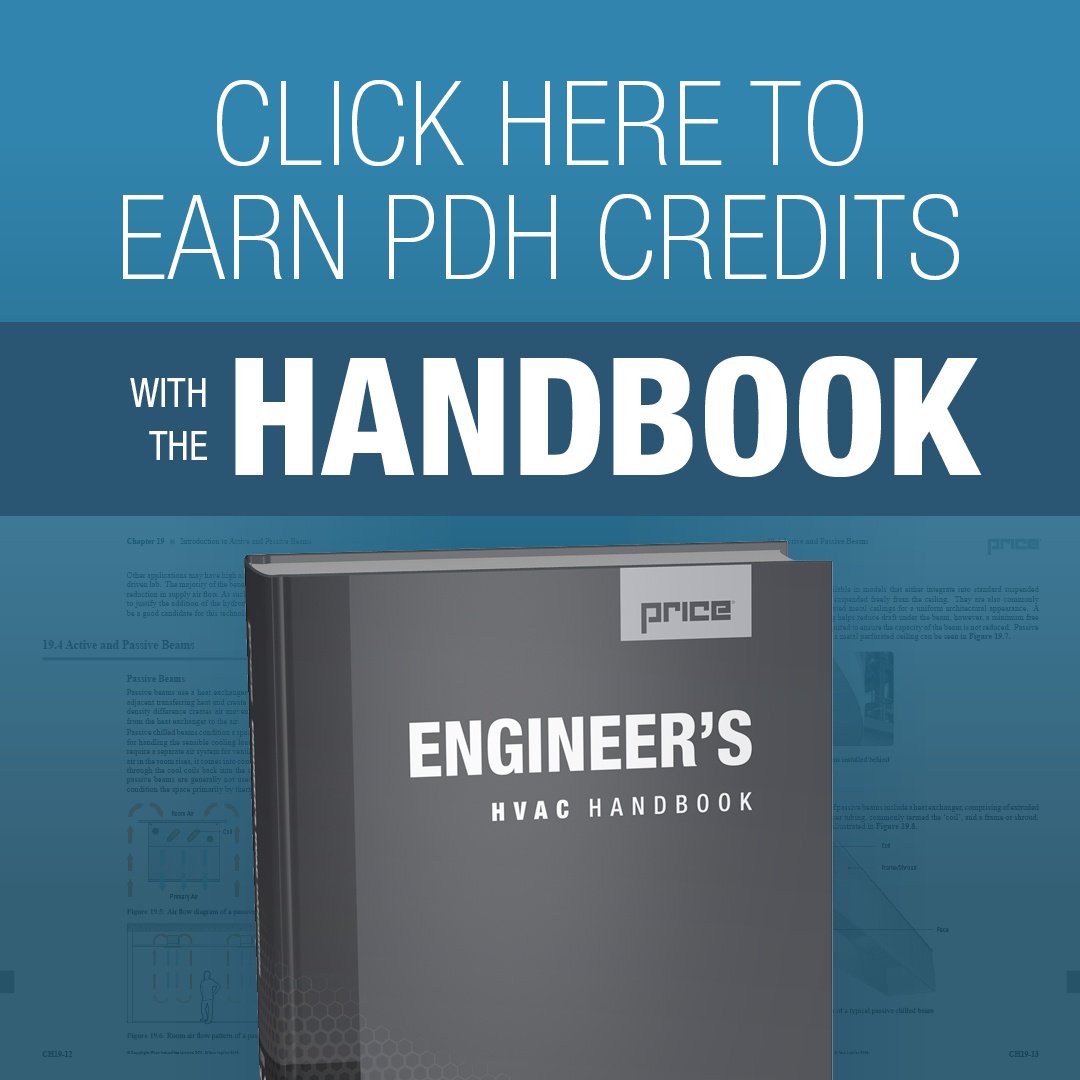